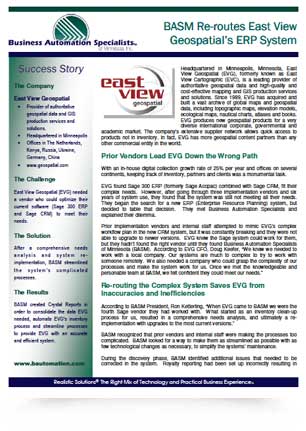 Prior Vendors Lead EVG Down the Wrong Path

With an in-house digital collection growth rate of 25% per year andoffices on several continents, keeping track of inventory, partners and clients was a monumental task.

EVG found Sage 300 ERP (formerly Sage Accpac) combined with Sage CRM, fit their complex needs.  However, after going through three implementation vendors and six years of system use, they found that the system was still not meeting all their needs.  They began the search for a new ERP (Enterprise Resource Planning) system, but decided to table that decision.  They met Business Automation Specialists and explained their dilemma.

Prior implementation vendors and internal staff attempted to mimic EVG’s complex workflow plan in the new CRM system, but it was constantly breaking and they were not able to upgrade to newer versions.  EVG knew the Sage system could work for them, but they hadn’t found the right vendor until they found Business Automation Specialists of Minnesota (BASM).  According to EVG CFO, Doug Keefer, “We knew we needed to work with a local company. Our systems are much too complex to work with someone remotely.  We also needed a company who could grasp the complexity of our processes and make the system work for us. Once we met the knowledgeable and personable team at BASM, we felt confident they could meet our needs.”

Re-routing the Complex System Saves EVG from Inaccuracies and Inefficiencies

According to BASM President, Ron Ketterling, “When EVG came to BASM we were the fourth Sage vendor they had worked with.  What started as an inventory clean-up process for us, resulted in a comprehensive needs analysis, and ultimately a re-implementation with upgrades to the most current versions.”

BASM recognized that prior vendors and internal staff were making the processes too complicated.  BASM looked for a way to make them as streamlined as possible with as few technological changes as necessary, to simplify the systems’ maintenance.

During the discovery phase, BASM identified additional issues that needed to be corrected in the system.  Royalty reporting had been set up incorrectly resulting in overpayments on non-royalty based sales. Additionally, EVG had an internal system, SDE, which stored all of their mapping information and needed to be linked to the Sage system.  Doug stated, “BASM took a very difficult project that continued to grow during the discovery  phase.  They took the time to really understand our needs, and came up with a total solution.”

“This was a particularly challenging aspect of the project,” recalls Ron. “There was no one subject matter expert at EVG, especially where their SDE system was concerned and no single source could tell us why the system was set up the way it was.  Links that were supposed to bring SDE map information into the Sage system for inventory tracking, Sales Orders and Purchase Orders made no sense and were causing other issues such as the royalty miscalculations.”

EVG’s Unique Identifier system had errors and the only way to correct them was for BASM to delete the Sales Order, Purchase Order and Inventory data and start from scratch as the work-a-rounds EVG used made the historical data inconsistent and unreliable.

Ultimately, the BASM team was able to map a simplified workflow and translate that process to work with Sage 300, Sage CRM and the SDE system.  They also created multiple shortcuts for EVG to streamline work processes.

EVG’s System and Processes are Transformed

As EVG acquires new maps, a Purchase Order is entered into the system to “buy” the maps.  BASM created a shortcut to automate the rest of the process which creates the inventory items and then creates the quote or sales order. Additionally, now that the files can be imported from the company’s SDE system into Sage 300 – which is needed in order to generate a quote – if an item number doesn’t already exist in Sage 300, the system will create it automatically.  Once a quote is accepted, the Sales Order is linked to a case in Sage CRM.  This provides the data that production processes, purchasing task and order fulfillment require to fulfill the customer orders.

EVG still needed the history detail for sales reports.  BASM created Crystal reports to combine the old and new data they needed to see. BASM also helped cleanup a sophisticated, and complex categorization system of customers and developed a script to delete e-mail bounce-backs out of the system, as well as clean up and delete contacts without a way to contact them (such as no phone, address, or e-mail).  Through this process, duplicate companies were consolidated, and overall the data was organized in a way that will allow the company to continue growing without outgrowing their ERP system. BASM’s next step with EVG is to help them put a better sales management system in place with their Sage CRM system.

Doug stated that he got everything he wanted from the system. “I got everything I was looking for.  Our inventory system is now in sync and accurate, so that our financials make sense!” He continued, “There are many benefits to working with the talented team at BASM; including the ongoing support and training.  They have more than software expertise; they have industry expertise, which is invaluable.”