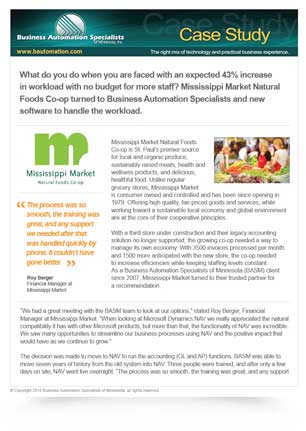 Mississippi Market Natural Foods Co-op is St. Paul’s premier source for local and organic produce, sustainably raised meats, health and wellness products, and delicious, healthful food. Unlike regular grocery stores, Mississippi Market is consumer owned and controlled and has been since opening in 1979. Offering high quality, fair-priced goods and services, while working toward a sustainable local economy and global environment are at the core of their cooperative principles.

With a third store under construction and their legacy accounting solution no longer supported, the growing co-op needed a way to manage its own economy. With 3500 invoices processed per month and 1500 more anticipated with the new store, the co-op needed to increase efficiencies while keeping staffing levels constant. As a Business Automation Specialists of Minnesota (BASM) client since 2007, Mississippi Market turned to their trusted partner for a recommendation.

“We had a great meeting with the BASM team to look at our options,” stated Roy Berger, Financial Manager at Mississippi Market. “When looking at Microsoft Dynamics NAV we really appreciated the natural compatibility it has with other Microsoft products, but more than that, the functionality of NAV was incredible. We saw many opportunities to streamline our business processes using NAV and the positive impact that would have as we continue to grow.”

The decision was made to move to NAV to run the accounting (GL and AP) functions. BASM was able to move seven years of history from the old system into NAV. Three people were trained, and after only a few days on site, NAV went live overnight. “The process was so smooth, the training was great, and any support we needed after that was handled quickly by phone. It couldn’t have gone better,” recalled Roy. Because Mississippi Market is a co-op, they focus on buying products that are locally produced or purchased from locally owned companies. Prior to implementing NAV, they used to spend three days compiling information on locally produced or purchased products as required by their Board. Now, because NAV tracks this data for them, the information can be produced in a matter of minutes.

Several months after the implementation, Jay Lyons replaced the Accounting Department Manager, and was able to train himself on the system. Jay stated, “NAV’s potential is unlimited. If we want to do something, NAV can do it. For example, we track sales by week and wanted to compare this year to the same week last year. By using numbered weeks instead of dates, we can pull the data we want to see, how we want to see it.”

Jay added, “Because the old software didn’t have the same type of functionality, we did a lot of work in Excel, including our monthly financials. Not only did this take a lot of time, but also, there was more possibility of human error. Now we can do it straight out of NAV, which saves us time in both producing the data and in quality assurance.”

With most invoices split between different departments in the store, streamlining this process was critical to gaining efficiencies. BASM was able to create several data entry shortcuts to enter invoices and catch manual errors. By using departments instead of account numbers, the AP process is now faster and more accurate.

Roy concluded, “The team at BASM is really great; they are friendly and competent and NAV is so powerful it really has unlimited potential.”