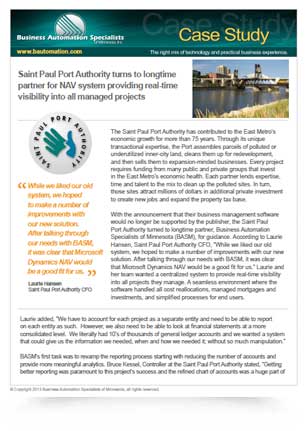 The Saint Paul Port Authority has contributed to the East Metro’s economic growth for more than 75 years. Through its unique transactional expertise, the Port assembles parcels of polluted or underutilized inner-city land, cleans them up for redevelopment, and then sells them to expansion-minded businesses. Every project requires funding from many public and private groups that invest in the East Metro’s economic health. Each partner lends expertise, time and talent to the mix to clean up the polluted sites. In turn, those sites attract millions of dollars in additional private investment to create new jobs and expand the property tax base.

With the announcement that their business management software would no longer be supported by the publisher, the Saint Paul Port Authority turned to longtime partner, Business Automation Specialists of Minnesota (BASM), for guidance. According to Laurie Hansen, Saint Paul Port Authority CFO, “While we liked our old system, we hoped to make a number of improvements with our new solution. After talking through our needs with BASM, it was clear that Microsoft Dynamics NAV would be a good fit for us.” Laurie and her team wanted a centralized system to provide real-time visibility into all projects they manage. A seamless environment where the software handled all cost reallocations, managed mortgages and investments, and simplified processes for end users.

Laurie added, “We have to account for each project as a separate entity and need to be able to report on each entity as such. However, we also need to be able to look at financial statements at a more consolidated level. We literally had 10’s of thousands of general ledger accounts and we wanted a system that could give us the information we needed, when and how we needed it; without so much manipulation.”

BASM’s first task was to revamp the reporting process starting with reducing the number of accounts and provide more meaningful analytics. Bruce Kessel, Controller at the Saint Paul Port Authority stated, “Getting better reporting was paramount to this project’s success and the refined chart of accounts was a huge part of that. In hindsight, we probably tried to do too much at one time during the implementation and conversion, but the BASM team kept us moving forward and helped us make a monumental task manageable.”

Laurie and Bruce concurred that they had huge expectations for the software and of the BASM team. “Our expectations were met, which is no small task,” proclaimed Laurie. “The ability to pull reports and have the information at our fingertips means we can have a question answered in five to ten minutes, versus two to four hours with the old system.” Bruce added, “We had no room for growth with our old software. With Microsoft NAV in place, it will free up time and allow us to utilize staff in other ways we couldn’t have considered before.”

With four people using the prior system for ten to fifteen years, change and user adoption is never easy. However, Laurie was happy to report, “Our team really likes the intuitive way NAV is set up. It’s easy to use and the reporting features are making everyone’s jobs easier.” Most notably, due to customized automation by BASM, the cash process has changed dramatically. Ron Ketterling, President at BASM explains, “With different funding sources, and cash being transferred back and forth, reconciliation automation was necessary. We were able to bring in controls that Saint Paul Port Authority didn’t have before. We designed reports to get better information, and trained the team on how to write their own custom reports.”

Integration of the investments and loans into the ERP system was the last component required to provide a centralized system. In the previous system, St. Paul Port Authority tracked investment activity in a separate, disconnected program and loan amortization schedules, including mortgages, in Excel. They would generate reports from the other program and then post all investment activity in a monthly journal entry for all the activity of each fund and project. Now, NAVInvest and NAVCash provide an integrated solution that tracks and maintains these components within NAV. NAVCash generates billing for payments and allocates the revenue to loan repayment and interest earned. NAVInvest handles the Mark to Market monthly Investment revaluations.

Laurie concluded, “We were less concerned about the software selection, as we trusted BASM’s recommendation. We knew having BASM partner with us on this conversion would be the key to our success. BASM isn’t just concerned with their bottom line, but they want their customers to be happy with their service and products. Auditors, at a recent Board Meeting, even acknowledged that this was one of the better conversions they’ve seen.”

As a result of their new system, St. Paul Port Authority received a 25% reduction in their audit fees; a cost savings they will continue to capture annually.