UltiMed Gets a Shot at Better Systems with BASM and NAV 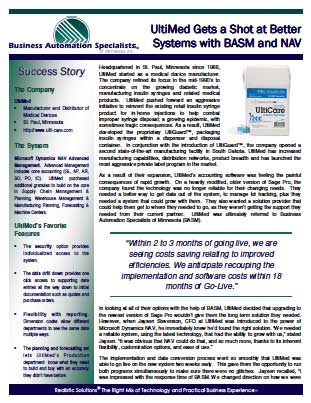 Headquartered in St. Paul, Minnesota since 1988, UltiMed started as a medical device manufacturer.  The company refined its focus in the mid-1990’s to concentrate on the growing diabetic market, manufacturing insulin syringes and related medical products.  UltiMed pushed forward an aggressive initiative to reinvent the existing retail insulin syringe product for in-home injections to help combat improper syringe disposal; a growing epidemic, with sometimes tragic consequences. As a result, UltiMed developed the proprietary UltiGuard™, packaging insulin syringes within a dispenser and disposal container.  In conjunction with the introduction of UltiGuard™, the company opened a second state-of-the-art manufacturing facility in South Dakota. UltiMed has increased manufacturing capabilities, distribution networks, product breadth and has launched the most aggressive private label program in the market.

As a result of their expansion, UltiMed’s accounting software was feeling the painful consequences of rapid growth.  On a heavily modified, older version of Sage Pro, the company found the technology was no longer reliable for their changing needs.  They needed a better way to get data out of the system, to manage lot tracking, plus they needed a system that could grow with them.  They also wanted a solution provider that could help them get to where they needed to go, as they weren’t getting the support they needed from their current partner.  UltiMed was ultimately referred to Business Automation Specialists of Minnesota (BASM).

In looking at all of their options with the help of BASM, UltiMed decided that upgrading to the newest version of Sage Pro wouldn’t give them the long term solution they needed.  However, when Jaysen Stevenson, CFO at UltiMed was introduced to the power of Microsoft Dynamics NAV, he immediately knew he’d found the right solution. “We needed a reliable system, using the latest technology, that had the ability to grow with us,” stated Jaysen. “It was obvious that NAV could do that, and so much more, thanks to its inherent flexibility, customization options, and ease of use.”

“Within 2 to 3 months of going live, we are seeing cost saving relating to improved efficiencies. We anticipate recouping the implementation an software costs within 18 months of Go-Live.”

WThe implementation and data conversion process went so smoothly that UltiMed was able to go live on the new system two weeks early.  This gave them the opportunity to run both programs simultaneously to make sure there were no glitches.  Jaysen recalled, “I was impressed with the response time of BASM. We changed direction on how we were going to handle lot tracking several times as we started to see the full scope of what the software could do and BASM implemented those changes right away.  They also modified forms so that they would look the way our team was used to seeing them.”   BASM also customized the software to streamline lot entry and force QA procedures on finished and raw material lots.

Jaysen continued, “There were unexpected benefits to working with BASM.  They are not only experts in the software, but they truly are automation and process specialists.  After seeing how our production facility operated, they were able to recommend ways to streamline it.  Implementing their recommendation, we will be able to minimize inventory, while improving customer response time, by moving product differentiation to the end of the process instead of the beginning.  They also saw opportunities to continue to enhance our technology automation and are currently looking for options to streamline our EDI processes.  They pointed out ways we can be more efficient above and beyond what the software could do for us.”

There were also unexpected benefits to implementing Microsoft Dynamics NAV.  According to Ron Ketterling, President at BASM, “While implementing the new system, UltiMed started to recognize procedural errors they had been making before. Our implementation process helped identify opportunities and shed light on better ways to do things internally.”  One example involved multiple work orders being opened by different departments for the same job.  Now, the company expects to save substantial money on product costing by only using one work order per job.

“Everyday someone on the team finds something new they like in the system – and they find the errors in the way we were doing things before. NAV has certainly opened our eyes to the right way of doing things,” stated Jaysen.  “In fact, we are so happy with the system and the projected cost and time savings, we are already looking at adding new modules.”  UltiMed plans to implement a module that will allow them to e-mail invoices automatically which will not only save staff time in printing and mailing, but the savings on hard costs such as paper and postage is expected to be significant.  An EDI module will allow direct connection between vendors and the system to eliminate duplicate data entry.  Additionally, they plan to tie the website into the system to streamline on-line ordering.  “Even the sales department is being impacted in a positive way,” said Jaysen. “Previously, our sales department never touched our system.  But now they are getting used to accessing it and they are already seeing potential benefits to their jobs, especially with the ability to access the system remotely.”

“This system will provide an accurate picture of the business to all parts of the company, including Sales & Marketing, Operations, Administration and Management, with the ability to slice and dice the data in the best way appropriate to the audience,” stated Ron. “In addition, lot traceability is a huge responsibility for a medical products company.  Having the ability to easily track lot usage throughout the process from purchase through manufacturing to sales will cut significant costs and time from UltiMed’s operations.”

Jaysen concluded by stating, “We’ve barely scratched the surface of what NAV can do for us; we expect there will be many more benefits down the road. Within 2 to 3 months of going live, we are seeing costs saving related to improving efficiencies. We anticipate recouping the implementation and software costs within 18 months of going live. After that, it’s pure profit in our pockets.”